As'salaamu Alaikum, and good day to you all,

It is a little over a week since I joined the UN family in Bangladesh, and it is my privilege and honour to join this celebration of International Day of Peacekeeping as my first major public engagement:

to pay tribute to the contribution of Bangladesh to UN Peacekeeping,

and to say thank you for the country’s unwavering commitment to the UN Secretary General’s priorities for peacekeeping.

The events of the day today – the Peacekeepers’ Run in the morning and the commemorative event at the BICC with the participation of Her Excellency the Prime Minister, both offered opportunities to celebrate the contribution of over a million peacekeepers – men and women – who have served under the UN flag since 1948, and to offer our tributes to nearly 4,200 of them that were killed in the line of duty.

We have also an opportunity to commemorate over one lakh and eighty-three thousand Bangladeshi peacekeepers who have served under the UN’s flag since 1988.

At this seminar we have additionally, an opportunity to reflect – to reflect on the lessons learned, the role and needs of peacekeeping in a rapidly evolving and increasingly uncertain world. I thank the Bangladesh Institute of Peace Support Operations Training for organizing this very timely seminar that creates an opportunity for collective reflection.

I thank the other speakers that have already given us all very rich and important analysis.

While preparing for this celebration, a photograph grabbed my attention. It depicts two Bangladeshi female pilots, with a helicopter in the background serving as UN peacekeepers.

An image is powerful: the photograph highlights how women are active and important agents of peace in armed conflict, and it illustrates the importance of UN Peacekeepers Contribution and their Commitment.

Each Peacekeeper leaves their home and risks their lives to promote peace across the world.

Since 1988 till today 1,83,378 Bangladeshi peacekeepers have participated in 55 UN missions in 40 countries.

I express my deep gratitude to these men and women of courage currently deployed in some of the world’s most challenging hotspots to protect the vulnerable and help to build peace.

This year’s observance focuses on the Power of Partnerships while the title for today’s seminar is the Need for Transformation to Meet the Necessity of Time. Both themes point towards a fundamental issue – that peace demands more than just peacekeeping, and in a rapidly changing world with complex drivers of violent conflict, the nature of peacekeeping itself must evolve.

Building and keeping peace takes multiple interventions, of which peacekeeping is but one. Making and maintaining peace needs strong democratic institution, participatory and responsive governance, rule of law and access to justice, all of which create spaces for peaceful resolution of conflicts.

The interlinkages between peace, conflict prevention, rule of law, justice, participatory democracy and governance are embodied in the 2030 Agenda with its specific focus on leaving no one behind.

While several the sustainable development address these correlates of peace, SDG16 specifically addresses these interlinkages.

It was to address the multiple drivers of violent conflict and engage the entire toolbox of peacemaking and peacekeeping, that the Secretary General launched the Action for Peacekeeping (A4P) on 28 March 2018 to renew mutual political commitment to peacekeeping operations.

Action for Peace includes a set of mutually agreed principles and commitments to meet and respond to these challenges and to ensure UN peacekeeping at its best remains a remarkable enterprise of multilateralism and international solidarity.

150 Member states have so far endorsed the Declaration of Shared Commitments and I am proud that Bangladesh is one of them.

The Action for Peace initiative focuses on eight key areas where we collectively need to improve on. The areas are 1) Political solutions to Conflict 2) Women Peace and Security 3) Protection 4) Safety and Security 5) Performance and Accountability 6) Peacebuilding and Sustaining Peace 7) Partnership 8) Conduct of Peacekeepers and Peacekeeping Operations.

While noting that peacekeeping operations are undertaken at different countries, the preparation begins at home. Keeping the preparation and eight key areas in mind, few points stand out that I would like to highlight.

Let us work to ensure we are continuing to strengthen the instrument of peacekeeping, and indeed multilateralism itself, by implementing our shared commitments.

When Peace is the Prize, we have every incentive to play as a team.

Hence why our focus this year is on the Power of Partnerships.

I would therefore like to conclude with one of the UN Secretary General’s messages.

“We know that peace is won when governments and societies join forces to resolve differences through dialogue, build a culture of nonviolence, and protect the most vulnerable”. 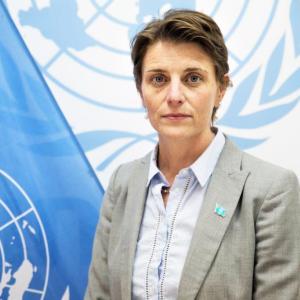